“The Government never closed any church in the Disaster Risk Management Act,” said Mr. Holness. “We never prohibited churches from opening, but the churches themselves decided that it was best to close their places of worship and to move worship online. I happen to know that the Seventh-day Adventist Church was one of the first churches to have done this, and I felt very pleased, because I saw this as a sign of social responsibility.”

Seventh-day Adventist Churches within Jamaica moved services online as early as March 21, 2020; eleven days after the first case of COVID-19 was confirmed in the country. The Government then proceeded to implement restrictive measures including protocols which curtailed the gathering of groups in all public spaces including the places of worship. The Church then implemented additional procedures for its congregations and established an online interface for worship services, with a flagship broadcast dubbed JA Adventists Online. The brand (Ja Adventists Online) was used in each of the 5 conferences, which comprises the Jamaica Union Conference of Seventh-day Adventists on a weekly basis. It was so impactful that it was featured during the Prime Time News on TVJ on Tuesday, April 7, for its innovation and all-inclusiveness; catering even to children. 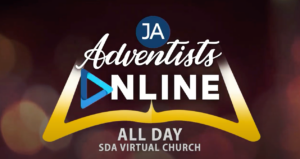 According to Prime Minister Holness, these steps were proactive and a sign of leadership, while highlighting the action as an example for other institutions to follow as the country tackles the COVID-19 pandemic.

“It was a sign that the church was exercising leadership and this is what we want to see”, continued Holness. “We want to see our national institutions/organizations exercise leadership. We believe that the early exercise of leadership paid off in keeping the cases low and ensuring that Jamaica was not counted among the countries that could have had significant outbreaks.”

Prime Minister Holness worshipped at the Lucea Adventist Church during his weekend tour of several parishes in western Jamaica.